A well drafted Antenuptial contract can save you time and money on litigation costs during a divorce and prevent a battle over the ownership of a business and other assets.  The more issues covered in the Antenuptial contract, means one less issue to litigate over during a divorce.  Therefore, it is a prudent investment to make prior to getting married.  One of the most important provisions a business owner can have in a Antenuptial contract is a provision addressing the appreciation of individual pre-marital assets (assets you possess prior to entering the marriage).

For example, let’s say your business, an asset, is worth R 6 million prior to getting married.  At the end of your divorce, your asset is worth R 12 million.  Your spouse could be entitled to half or more of the R 12 million appreciation during the marriage.  However, if you have a valid and enforceable Antenuptial contract whereby you and your partner agree that pre-marital property and any growth thereon is excluded at the start of the marriage, then such assets will not be taken into account for purposes of an accrual.

Marrying in terms of an Antenuptial contract (out of community of property) can also help limit your liability for your future spouse’s debts and prevent you from inheriting this debt during the marriage and divorce.  Remember, creditors can go after marital property- i.e., your business if you are married in community of property.

Antenuptial contracts may be unenforceable if certain formalities are not followed. A common attack to a Antenuptial contract is if both spouses were represented by the same attorney or one spouse was forced into the contract and did not really know what the consequences are. It is critical for you and your spouse to have separate attorneys who are independent of one another during the drafting and negotiation of the Antenuptial contract or at least, if you do go to one attorney, make sure that the attorney explains the pro’s and con’s and give the other spouse and option to discuss the agreement with another attorney.

An Antenuptial contract or pre-nuptial agreement must be entered into before marriage through a notary public, if not the marital regime by default will be that you are married in community of property. To change your marital regime later after divorce is costly and can only be accomplished by way of a court application in the High Court. 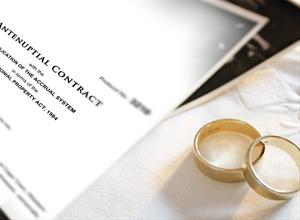 We tapped the brain of Bertus Preller one of Cape Town’s best divorce and family law attorneys on Antenuptial or Prenup Agreements. Bertus Preller is based in Cape Town and has more than 20 years experience in most sectors of the law. He specializes in Family law and Divorce Law at Abrahams and Gross Attorneys Inc. in Cape Town and litigates in divorce matters across the country. He is also the Family Law expert on Health24.com and on the expert panel of Law24.com and is frequently quoted on Family Law issues in newspapers such as the Sunday Times and Business Times. His clients include celebrities, actors and actresses, sportsmen and sportswomen, television presenters and various high net worth individuals as well as ordinary people. He has a deep passion for matters involving children. His areas of expertise are Divorce Law, Family Law, International Divorce Law, Divorce Mediation, Parenting Plans, Parental Responsibilities and Rights, Custody (care and contact) of children, same sex marriages, unmarried father’s rights, domestic violence matters.

What is an Antenuptial agreement?

It is a contract entered into by two people, prior to their marriage, in which they stipulate the terms and conditions for the exclusion of the community of property between them. It ensures that one spouse’s creditors cannot hold the other person liable for repayment of debt, unlike when people marry without entering into an Antenuptial Contract, i.e. ‘in community of property’.

An Antenuptial Contract can also include any terms and conditions as long as they are not contrary to public policy. Most of these terms and conditions relate to the division of assets should the marriage be dissolved due to either death or divorce. During the marriage each spouse will retain his/her separate property and would have complete freedom to deal with that property as he/she chooses. This would not be the case if the parties were married ‘in community of property’.

Who needs an Antenuptial agreement?

While antenuptial agreements (“prenups”) are recommended to anyone for whom they make good economic and personal sense.

People who may benefit from prenups include those who:

What types of issues can be included in an Antenuptial agreement?

Antenuptial agreements or prenups can include provisions relating to:

Should an Antenuptial agreement be considered cast in stone or can it be varied during the course of the marriage?

It is possible to change your Antenuptial agreement on application to the High Court.

What is meant by a Marriage out of Community of Property?

Each spouse retains his or her own assets and liabilities whether acquired before or during marriage. There is no sharing of profits and losses. Both spouses have full and independent contractual capacity. Upon death or divorce, each spouse keeps control over their own assets. This clearly gives parties absolute independence of contractual capacity and protects the estates of each party against claims by the other party’s creditors. There is no provision for any sharing whatsoever. A party who contributed to the other party’s estate whether in cash or otherwise would have a heavy onus to prove that he or she was entitled to anything from that party’s estate on dissolution of the marriage. Where one party stays at home to raise children and does not contribute financially towards the marriage and the other spouse works and accumulates assets, the former may find herself with nothing and no claim to the assets of the latter. The marriage is governed by a contract known as an ante nuptial contract which is concluded by the parties before the marriage. If the marriage occurred after 1 November 1984, the contract had to specifically exclude the system of accrual. In the absence of this exclusion the rules of accrual will automatically apply.

What is meant by a Marriage out of Community of Property with Inclusion of the Accrual System?

The Matrimonial Property Act 88 of 1984 brought with it the “accrual” system which permits a form of sharing, consistent with a primary objective of marriage, but permitting retention of each party’s independence of contract and ability to retain their own unique separate estates. “Accrual” means increase. The accrual system is a form of sharing of the assets that are built up during the marriage. The underlying philosophy in respect of the accrual system is that each party is entitled to take out the asset value that he or she brought into the marriage, and then they share what they have built up together. One spouse’s property cannot be sold to pay the other’s creditors if the other becomes insolvent – in contrast to the case where the parties are married in community of property. It is of utmost importance that a party wishing to enter into an Ante Nuptial Contract must fully understand what it is they are signing. It is for this reason that a standard form contract cannot be used, that consultations cannot be held over the phone or by means of email and that, unfortunately. The important features of an accrual marriage are in essence the following: Each party retains his or her own estate. Each party may accumulate assets and incur liabilities without interference from or assistance of the other spouse. The estate of each party is determinable separately. The monetary value of the smaller estate is subtracted from the monetary value of the larger estate, the difference is split, and the party having the larger estate pays half of the difference between the two estates to the party with the smaller estate. At dissolution of the marriage, the estate of each party is calculated by listing all assets, listing all liabilities, subtracting liabilities from assets and arriving at a net asset value. In practical terms this amounts to a similar division to a marriage in community of property. However there are certain crucial factors of an accrual marriage which add complexity and much more freedom of choice. When drafting the Ante Nuptial Contract, the parties can each decide to exclude certain assets. The effect of excluding an asset will be that it does not feature on the asset statement at dissolution of the marriage and is completely excluded from the calculation. Assets which are not properly described can cause huge problems when the executor or the divorce attorney tries to decide what to do with it in calculating the net accrual value. To exclude either a specific asset, or a commencement value, or both (which must be separate and not derived from the same asset), can effectively ensure that couples share only what they choose to share and keep separate any item or items, or values, which they do not believe it fair to share (for example something acquired before the relationship commenced). Parties not wishing to exclude specific assets may exclude a certain sum of money which is the agreed equivalent of assets which they do not wish to share, and which is termed a “commencement value”. Excluded from the Accrual Certain property belonging to either the husband or the wife may not be taken into account when the accruals are worked out: Any damages awarded to either spouse for defamation or for pain and suffering; Any inheritances, legacies or gifts that either spouse has received during the marriage, unless the parties have agreed in their antenuptial contract to include these or the donor has stipulated their inclusion; A donation made by one spouse to the other. This is not taken into account as part of either the giver’s or the receiver’s estate, with the result that the giver cannot recover part of what he or she gave and the receiver need not return any of it.

SAMPLE OF AN ANTENUPTUAL AGREEMENT WITH ACCRUAL

This agreement is a sample and is of a general nature. Certain additions and ammendments may be required to suit your specific needs.

APPLICATION OF THE ACCRUAL SYSTEM

(INSERT NAME OF NOTARY PUBLIC) Notary Public, practising at Pretoria in the Province of _______

And the appears declared that whereas a marriage has been agreed upon, and is intended to be solemnised between them, they have agreed and now contract with each other as follows :

1. That there shall be no community of property between them.

2. That there shall be no community of profit or loss between them.

5. That the assets of the parties or either of them, which are listed hereunder, having the values shown, and all liabilities presently therewith, or any other asset acquired by such party by virtue of his possession of former possession of such asset, shall not be taken into account as part of such party’s estate at either the commencement or the dissolution of the marriage.

The assets of (INSERT FULL NAME) so to be excluded are R000.00 consisting of : (INSERT DETAILS)